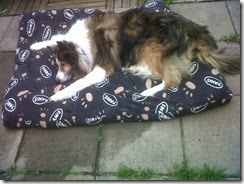 This is one of the last pictures I got to take of The Elder Statesman.  I had been looking at him every day for over a year wondering when age was finally going to catch up with him.

Over the last year he had gotten progressively more frail and forgetful, often stopping in his tracks because he had no idea of where he was going. He barked at nothing, walked up to walls and waited for somebody to remind him to turn around. When he started to go down, it was very quick.  On the Friday he pottered along for a little walk and got all perky when a new female dog passed by, doing the dog equivalent of straightening himself up and adjusting his tie.

On the Saturday he was clearly ailing and by the Sunday, when this picture was taken, he was unable to move around without help, and was really unsettled – he just seemed unable to get comfortable.  Because it was a nice day, I carried him out into the garden and let him lie in the sun on his bed, which he seemed to appreciate.

I sat up all night with him and early this morning brought him to the vet’s office and stayed with him until he was gone. I don’t think he even realised where he was.

Tim was the most beautiful dog anybody could have had. Every day with him was a joy.  RIP my wonderful friend.

Posted by Yours truly, confused, at 21:05 2 comments:
Email ThisBlogThis!Share to TwitterShare to FacebookShare to Pinterest
Labels: My bio 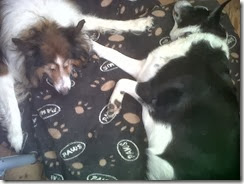 In Tim’s last days, Chloe, Izzy and Duby seemed to want to stay close to him all the time.

When Chloe moved into Baskerville Manor, she formed an immediate bond with Tim, and hated to be parted from him. They behaved like an old married couple.

Izzy clung to Tim when she moved in too.  On the first Halloween she spent with us, she would only be comforted through the fireworks by huddling up beside him. Both girls seemed to work together to ensure he was not alone for a moment. Even cheeky little Duby behaved like a perfect gentleman around him in the days running up to his death. 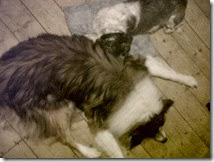 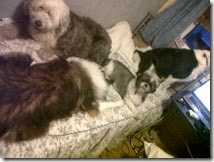 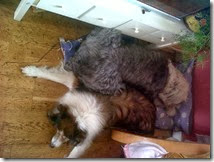 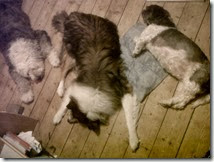 Posted by Yours truly, confused, at 01:58 2 comments:
Email ThisBlogThis!Share to TwitterShare to FacebookShare to Pinterest
Labels: My bio 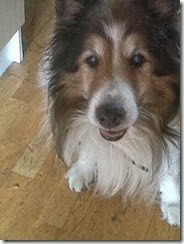 Look at me, do I not have the loveliest smile in the universe? Am I not the sweetest old man in you ever saw? Haven’t I kept my looks well?

Well then, you are permitted to provide lunch and cuddles, in that order. 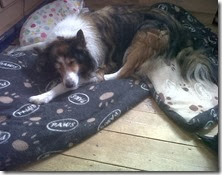 As I am The Elder Statesman, I am entitled to the best comforts in Baskerville Manor.

Hence I have appropriated all available dog beds to snooze on in the sunshine from the window. 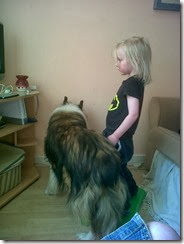 Better make sure he doesn’t get any closer in case it bites him. 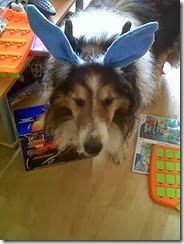 So, the Foxecubs are here for an Easter sleepover so I’m on entertainment duty.

Here I am making sure the toys are properly scattered on the floor and at the same time modelling my blue bunny ears.

I think I look rather fetching.

Posted by Yours truly, confused, at 12:48 No comments:
Email ThisBlogThis!Share to TwitterShare to FacebookShare to Pinterest
Labels: Easter, Minding, Things I like to do 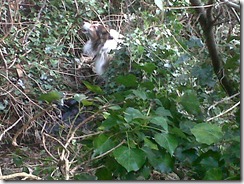 I really enjoy exploring the outer reaches of the Baskerville Manor estate, particularly the wildlife reserve at the end of the garden.

Here I am channelling my inner wolf.  (Actually, I was engaging in my most favourite activity – a nice spot of random barking at nothing in particular).

Easter Herding Minding My bio Snooze Things I like to do